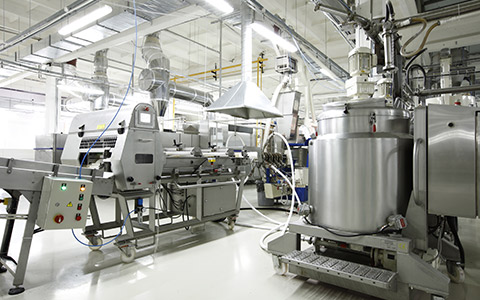 Leases over the exiting three facilities (located on the same lot) were due to expire in five years. These facilities were old and largely unsuited for candy production. The client planned to relocate on lease expiry into a more suitable, purpose made facility.

Expanding production was also creating a requirement for seven bulk chocolate and liquor storage tanks – 60,000 lbs each. Existing foundations would not support these.

In addition, six new belt coating machines had been ordered to meet production needs. There was no space to install these.

The client had identified two possible sites for a temporary 5-year leasing to accommodate the new manufacturing equipment and associated manpower and storage needs. These were both within 1 km of the exiting site.

One site was new, requiring a new TI office buildout. It was slightly larger than the required manufacturing footprint, but could accommodate some raw material overflow.

The second site was older with slightly lower rent.

The client’s concept was to establish the new production lines, some overflow storage and some manpower in the older facility. The new storage tanks were to be located in the exiting facility on an already subsiding floor.

This proposed second facility required some improvements to the offices, had no fire protection system installed and exhibited some significant challenges necessary to upgrade to food safety / CFIA requirements.

Kelmic suggested a revised manufacturing facility plan. A new DC was established in the newly identified facility and all exiting finished goods were relocated.

The new facility was racked with over 1,100 pallet locations using used racking, saving over $20,000 compared to new.

The offices were finished to accommodate the senior office staff and a new head-office established. The offices were linked via line-of-sight microwave for data and telephone.

The facility was food certified and operational in four months

In the vacated warehouse space the floor was partially removed and new foundations cast to support 8 new 60,000 lb tanks.

The tanks were designed to be heated by wrapping each with 3,000 ft of PEX pipe and spray-foam insulation. This saved over $10,000 per tank over conventional jacketing designs.

Installing equipment in the exiting facility avoided the cost of installing a new fire protection system saving over $150,000 in up-front costs.

The TI build-out in the DC was completed for the landlord’s allowance as part of the lease further reducing up-front investment by more than $40,000.