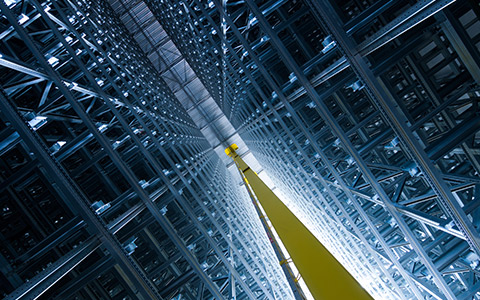 Insights From A Promotional Garments Distributer

A sizable promotional garment distributor with facilities around North America had recently acquired an existing building of 65,000 sq ft and wanted to consolidate their exiting operations into this building.

Existing facilities were stretched to capacity. Picking was undertaken manually with carts hence stack height was limited except for overstock items. A 95,000 sq ft overstock warehouse was also full, and a lack of racking was creating operational challenges.

The new facility floor had experienced some significant differential settlement with level variances in excess of 4” in 30’. The floor was also cracked and had rebar exposed in several places Lighting was old and dim.

The client projected a need to handle over 10,000 high-volume SKUs, each to be individually piecepicked. Calculations showed that over 70,000 boxes needed to be accommodated immediately, between fast movers, slow movers and overstock pallets.

Growth considerations were also considered critical with 60% to 100% growth projected over 10 years in both volume and SKU counts.

New racking and equipment was required, and no salvageable racking was available in the exiting facilities.

Initial budget was limited as the move was considered a major cost.

The client had approached several racking vendors and equipment suppliers for solutions to the density requirements. None had been able to accommodate more than 60% of the base requirements (SKUs, pick faces, boxes).

A need for an innovative method to increase density while retaining pick faces led to a very-narrow aisle design. Man-up order pickers operating in 60” aisles were selected, capable of self-navigating via in-floor sensors to precise pick locations both horizontally and vertically.

Use of this equipment allowed a design of three zones: Fast movers are picked from one aisle and replenished from the rear of carton-flow rack. This allowed for over 14,000 pick faces, with each SKU capable of 4 boxes per lane.

Slower movers were accommodated on a static rack two deep and overstock items on pallet rack capable of storing over 2,800 pallets or over 56,000 boxes.

Floor level issues required a topping screed to be placed over the existing floor. This was designed and installed in 5 weeks.

Increased efficiencies from the automated pick and consolidate system drove operational savings in excess of $1 million annually over and above repaying the cost of the installation with a head count reduction of over 22 staff.

The entire project was fast tracked with concept-tooccupation completed in 7 months. This included concept and design, budget preparation and approval, equipment demo in Europe, replacement of all warehouse lighting, floor remediation, racking procurement and installation, rail guidance installation and installation of the auto navigation system and an order consolidation zone with conveyor system.