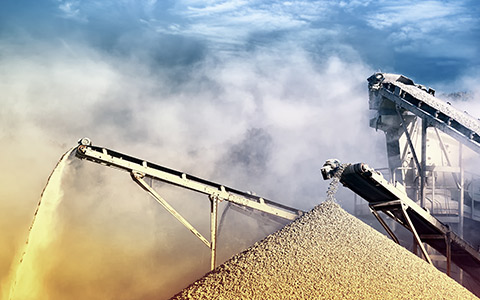 Insights From The Metals & Mining Industry

Recently acquired by a large construction materials group, this stone quarry in Swaziland was the only road stone and concrete stone source for more than 120 km. Contracts had been awarded for the upgrading of the local main arterial roads requiring stone supply in excess of double the current best production rates on a sustainable basis for more than 14 months. Stockpiles were reducing rapidly to meet ramping demand with less than 4 weeks of cover.

The quarry’s equipment was old and constantly breaking down. Haul trucks ran an average of 62% of available time.

The main crusher was in disrepair and output was less than 25% of manufacturer specified capacity. Best ever recorded production was less than 40% of specifications.

The management team’s skills were poorly suited to their roles. No formal reporting existed, and production meetings were informal discussions with no minutes or actions.

No demand planning or master scheduling existed. Customers often arrived to collect a particular stone size and had to be offered different sizes instead, often at a loss.

The quarry personnel were generally unskilled and more than 90% illiterate. Only 30% spoke English fluently.

There was a strong animosity between management and workers due largely to the “colonial style” of management used by the existing quarry manger, who remained office bound and had not visited the mine operations in more than 7 months.

The quarry was hemorrhaging cash with a need to increase production by 60% to break even. In addition, the strategic nature of the current demand threatened severe financial penalties for road construction crews if demand could not be met. Local management had no plan to meet these requirements.

A full market demand plan (sales forecast) was generated and updated weekly. This fed into a comprehensive plan for stockpile inventory build for critical-sized stone.

Alternative crusher settings were used to optimize stone size production for demand. Maintenance to the crusher increased output three-fold, removing the crusher as the bottleneck to production.

A planned dump truck overhaul and maintenance program was undertaken increasing truck availability from 62% to 93%. A capital replacement program was initiated that ultimately increased up-time to 97% Drill teams were trained “at the face” to increase drilling depth, increasing blast yield by 30%.

Once the crusher step was removed as bottleneck, an additional drill rig was added to increase production to meet the crusher capacity without the need for additional crew members.

Revised blended stone products were sold to the local market at a price reduction to remove excess waste product stockpiles and augment the revenue stream.

Profitability was resorted and contractual commitments were met, all while registering a noticeable improvement in customer service that ended up exceeding expectations.

As a result of the radical changes implemented by Kelmic, employee relationships dramatically improved.